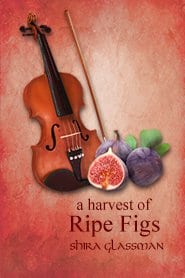 A Harvest of Ripe Figs

Esther of the Singing Hands is Perach’s Sweetheart, a young and beautiful musician with a Girl Next Door image. When her violin is stolen after a concert in the capital city, she doesn’t expect the queen herself to show up, intent upon solving the mystery.

But Queen Shulamit — lesbian, intellectual, and mother of the six-month-old crown princess — loves to play detective. With the help of her legendary bodyguard Rivka and her dragon, and with the support of her partner Aviva the Chef, Shulamit turns her mind toward the solution — which she quickly begins to suspect involves the use of illegal magic that could threaten the safety of her citizens.

Circling the room over and over, she kept looking, unable to believe the evidence of her own eyes. Somehow Eli had heard her and appeared in the doorway. “What’s the matter?”

“Did you leave it at the lake?”

“No! When have I ever done anything like that?”

“Maybe you were distracted from meeting the queen.”

“No, I remember putting it just there, on the floor by the bed,” Esther murmured, her words coming out rapid-fire, “so that if anything happened in the night I’d be able to grab it on my way out of the room. I remember putting it just by that knothole in the floor; I remember thinking how funny it was that it looked like a cat’s head.” Her voice grew louder. “There’s hardly anything in this room — nowhere else it could be. Do you see it? I don’t see it!”

Someone else came to the doorway, and Eli spoke with them under his breath. Esther continued to wheel around the room, hoping that the next time she rounded the bed, it would be there, and all this would be a funny nightmare they’d laugh about later.

“What’s happened?” said the innkeeper. There were servants with him, as well as curious guests who’d been in the courtyard and were attracted by the commotion.

“Her violin’s gone missing,” Eli explained in an even tone.

“The door was locked,” Esther exclaimed.

“The lock’s been picked,” one of the servants pointed out.

“What?” Heat suffused Esther’s face, and her heart sank into her stomach and made her feel sick.

“You two, go summon the queen. She’s good at this sort of thing.” Esther heard the innkeeper talking to his servants from what seemed like a thousand miles away as she sank down upon the bed, uncontrollably sobbing.