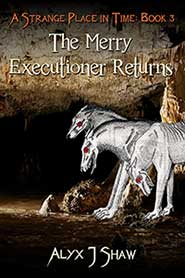 A Strange Place in Time – Book 3

The battle has begun, and old friends become new enemies, and allies become traitors. The Court of Hercandoloff realises that the only way to avert true disaster is attack the instigators of the rising darkness, and that will take a great deal of secrecy and deception. As Arrowsmith returns to Earth to persuade a friend to come to Dargoth, the Wizard-King Blackbird finds himself facing foes alone in his own palace, as the army rides north to the Kingdom of Kirianna.

With the Master Thief blinded and missing, Blackbird sick and injured, and only a matter of days before one adversary is brought back form the dead, plans have to be made, and quickly. There is no chance of real victory, only of a stalemate, and that is with every member of the Court present.

The search for Infamous leads the Court to the dead remains of the holy city of Palaklais, and the Temple of the Creator, but what they find there does not give them hope. The god of madness, SkullDigger, awaits them, as the most powerful of their adversaries, Rhaklan the Damned. The Court is without one of its most important members, and the strongest of their foes have joined forces. The Court has no choice but to fight, after they make plans for their own imminent demise.