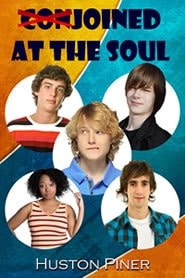 Conjoined at the Soul

I’ve finally made it to fifth period after surviving a typically boring morning and whatever it was they served for lunch today — they called it spaghetti, but I swear it was wiggling.

Art. It’s my favorite class, and unlike some of my other classes, I’m very good at it — I’ve got artistic flair. Our teacher is Mrs. Pilt; she’s the stereotypical Art teacher. She wears smocks of various patterns and colors, and they’re always stained with smears of paint.

The Art room itself reeks of pottery clay, glue, and God knows what else. The walls are lined with shelves and paintings, and there are weird mobiles like Picasso spiders hanging from the ceiling. It’s always noisy and the radio constantly blasts out the Bee Gees, Dire Straits, and the B-52s, with a little Chic thrown in. A number of rectangular tables are littered here and there with up to six people sitting at them. Annie, Jeremy, and I sit at the table closest to Mrs. Pilt’s desk. We’re her favorite students.

The great thing about Art class is as long as you stay on task, Mrs. Pilt lets you chat with the people around you. At our table, Annie does most of the talking, I get a few words in every now and then, and Jeremy rarely speaks at all.

Today we are starting a new project using charcoal, and for the moment, even Annie’s quiet while we consider the charcoal and paper before us. If I’m going to tell them I’m gay and enlist their help, now is my best chance; if I don’t act fast and Annie starts talking, I’ll be lucky to get a word in edgewise.

I open my mouth, but a lump forms in my throat. I take a deep breath and try again, but my stomach flutters.

What’s wrong with me? Why am I so nervous all of a sudden? Maybe if I ease into the subject.

“Did you see Andy Gibb on TV this weekend? He’s good-looking,” I manage to say without stammering.

“Honey, good-looking doesn’t even begin to describe Andy Gibb!” Annie says while pulling at a lock of wiry black hair and grunting out one of her peculiar snickers.

Annie’s laugh is kind of a cross between a giggle and the sound some people make when they’re blowing their noses. She’s definitely got more than her quota of artistic flair. Today she’s wearing a tangerine and lime colored disco party dress. She’s outspoken and outlandish and she doesn’t care who knows it.

“What other singers do you like, Randy?” Jeremy says without looking up.

Jeremy’s quiet, and gets along with everybody — except for that ongoing low-rumble, love-hate thing he and Annie have. It’s okay though, because in the three years I’ve known them, they always sit together and they look out for each other, despite constantly grumbling.

“Well,” I say, “on the male side, I guess I’d say Rod Stewart; that song Georgie was just so moving.”

“The one about the gay guy?” he mumbles and Annie starts to snigger.

“Yeah, I’m gay,” I blurt out. So much for easing into the subject.

Annie freezes in mid-snort. Jeremy looks up without raising his head.

“Of course you’re gay, sugar,” Annie chuckles. “But you don’t have to say it so loud.”

I quickly look around and turn beet red.

Annie’s smile softens. “Now, don’t be embarrassed, sugar. I just mean I’ve had my suspicions about you for a while. You dress too well, and you’re always combing your hair; and honey, you even like the Village People.”

“So what?” I retort. “Lots of people like the Village People. What’s that got to do with anything?”

“Honey, it’s about hanging out with all the boys,” she laughs and adds. “You get it now?”

It’s painfully obvious that Annie knows a lot more about the gay world than I do; I’ve got a lot to learn. And being the generous, take-charge person she is, Annie’s more than ready to take on the mission of teaching me, as well as helping me find a boyfriend. She immediately launches into what promises to be the first of several lessons on how to spot a gay guy.

“Now there are some basic things you need to look for,” she lectures. “Like if he talks kind of girly, or sort of walks like a girl, it might mean he’s gay.”

“No, sugar, you don’t talk girly,” she says and preemptively adds, “And you don’t walk girly either.”

“And that doesn’t prove anything anyway,” Jeremy mutters, scratching his nose and leaving a dark charcoal smudge. He’s always talked kind of girly himself.

“I said it might mean he’s gay, not proves it,” Annie snaps. She looks at Jeremy, points to her nose, and he tries to wipe the smudge off his own.

“It’s part of the overall assessment you need to make before you stick your… uh… neck out.”

“As subtle as a wet tongue in the ear,” Jeremy sighs.

“Another important thing is the look,” Annie continues, totally ignoring him.

“You mean is he good-looking?” I ask.

“No, sugar. How he looks at you. Like do his eyes linger on you? Have you ever been in a room full of people and seen somebody you thought was really attractive?”

“Okay, well, I bet you looked at him a bit longer than you did the other people in the room. Maybe you even kept coming back to look at him again.”

“So if a guy looks at you like that, it may mean he thinks you’re attractive, which would mean …?”

If you liked this book you might like:
Changing Jamie, Monster Town, My Life as a Myth, Necromancy and You!, Vampirism and You!, Tyler Buckspan.

Be the first to review “Conjoined at the Soul” Cancel reply