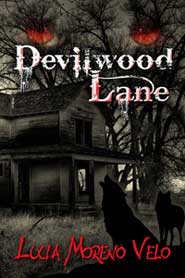 When the Jeffersons move to Darkfort, their reputation precedes them. Mrs. Jefferson has recently disappeared and everybody just knows her husband must have killed her. Suddenly, the whole town is in an uproar. But nobody is more shaken than Jamie Park, who falls in love with Timothy Jefferson. When Jamie finds out that Timothy’s a werewolf, he’s surprised, but not enough to stop inviting him to his bedroom every day after school. But then the school bully dies after a fight with Timothy, and Jamie starts thinking that maybe he is dating a monster, after all.

Then Jamie finds disturbing information about his father’s death, ten years before. He starts looking into Kevin’s death and decides there must be another werewolf pack in Darkfort. But Timothy doesn’t believe him. As Jamie starts to understand the true nature of werewolves, he is revolted by their violence. But when the Jefferson’s old pack turns up to destroy them, Jamie finds himself fighting along Timothy.

Fighting for the pack and for his life. And with a little luck, for a chance to unravel the mystery of Kevin’s and his father’s death.

Be the first to review “Devilwood Lane” Cancel reply