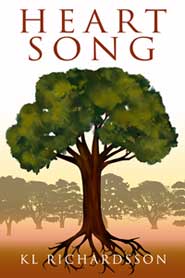 After a daring rescue, and the realization that Katjin and Mikael’s empathic and physical bond isn’t going to go away on its own, the two boys are exiled from the Clan Lands for training, accompanied by Katjin’s sometimes-rival, sometimes-friendly cousin, Soren. As Lowlanders and Clanfolk alike both fear and revile the demonic Shahi, all three of the boys are surprised to learn that that’s their destination: the mythic lands of the Shahi, located over mountains that few dare to cross.

In the Shahi lands nothing is what they thought it would be. While most Shahi are magic users, none eat babies or breathe fire as the stories always told. Katjin and Mikael’s taskmaster, Tai, however, could be one of the monsters of old, the way he tries to manage the psychic bond between Katjin and Mikael. As the boys strain against Tai’s iron rule, they realize just how out of control their combined powers are, and how much they’ll have to work together to control them. Before they can, though, word comes to the Shahi land of the whereabouts of Soren and Katjin’s kidnapped clan, and the three boys rush off to try to save them. Can the boys overcome all of their doubts, or will their relationship work against them?

Be the first to review “Heart Song” Cancel reply