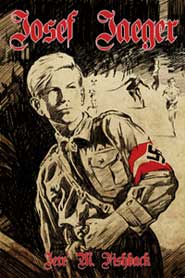 View cart “The Dybbuk’s Mirror” has been added to your cart.

Josef Jaeger turns thirteen when Adolf Hitler is appointed Germany’s new Chancellor. When his mother dies, Josef is sent to Munich to live with his uncle, Ernst Roehm, the openly-homosexual chief of the Nazi brown shirts. Josef thinks he’s found a father-figure in his uncle and a mentor in his uncle’s lover, streetwise Rudy, and when Roehm’s political connections land Josef a role in a propaganda movie, Josef’s sure he’s found the life he’s always wanted. But while living in Berlin during the film’s production, Josef falls in love with a Jewish boy, David, and Josef begins questioning his uncle’s beliefs.

Complications arise when an old friend of his mother’s tells Josef that his mother was secretly murdered by the SS due to her political beliefs, possibly on Roehm’s order. Josef confides in his Hitler Youth leader, Max Klieg. Klieg admits he knows a few things, but he won’t share them with Josef till the boy proves himself worthy of a confidence.

Conflicting beliefs war within Josef until he must decide where his true loyalties lie, and what he really believes in.

Be the first to review “Josef Jaeger” Cancel reply