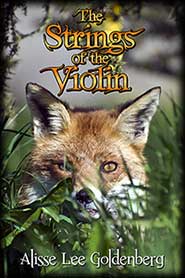 The Strings of the Violin

Seventeen-year-old Carrie is lying in her backyard ignoring all the looming responsibilities in her life, when a fox makes a mad dash across the grass in front of her. After she manages to keep her dog from attacking the frightened animal, the fox turns to Carrie and seems to bow in gratitude before he disappears into the bushes. All Carrie knows in that moment is that something has unexpectedly changed in her life.

Carrie has been best friends with Lindsay Smith and Rebecca Campbell for years. During a summer when they should focus on choosing colleges, the girls suddenly find themselves swept away on the adventure of their lives. The fox reappears three days later and reveals to Carrie that he is Adom, emissary to the king of Hadariah. With his land of music and magic in peril, Adom has been sent to seek help from Carrie and her friends. In the blink of an eye, the three teenage girls go from living an average suburban life to being the champions of a world where they must contend with giants, witches, and magical beings. Will they ever make it home once more?