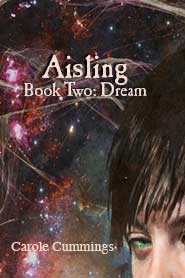 What begins as Constable Dallin Brayden escorting the prisoner Wilfred Calder back to Putnam quickly turns into a flight for both their lives. Political betrayal and malicious magic lurk behind every bush and boulder in their flight across the countryside, resulting in Dallin becoming more protector than gaoler, and fostering a growing connection between him and his charge. Haunted by dreams not his own and pursued by just about everyone, Dallin begins to understand that he’s not just protecting Wil out of duty anymore.

As the shadow of Wil’s previous life as a captive and tool continues to loom, the shadow of the man who kept him prisoner looms larger. Forced into a terrifying battle of both will and magic for not only his life, but his soul, Wil discovers that the Aisling is sought by more powerful enemies than the Guild and the Brethren: ancient gods and soul-eating spirits seek what lives inside him as well. And it seems his only salvation may well be Dallin and his goddess, the Mother, against whom Wil has been warned all his life.