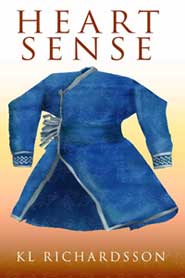 The only son of a traveling merchant, Katjin spends his summer in the clan lands with his grandparents. He wishes his father, his apa, would take him along, but despite the promises that someday he’ll get to go, Katjin is left behind while his apa heads away on business that seems more and more suspicious the older Kat becomes. During one such summer, Katjin finds Mikael, a lost young man, who draws Kat to him by answering his song.

In a world where the Empire brands all people as either ‘paths, people with psychic talent, or as non-’paths, Mikael is remarkable in that he has no brand. Fearing that the cavalry, who are arriving to recruit new members, will find Mikael in their clan and bring the Empire’s fury down upon them, the clan sends Kat and Mikael to hide away until it is safe – along with his cousin Soren to keep them both safe.

Knowing the best way to keep Mikael from being taken is to make him a member of the clan, Soren and Katjin plan a blood bonding ceremony, but they have no idea what kind of trouble they’ve started with their actions. Katjin learns soon enough that he won’t be able to escape his bond with Mikael, and that danger lurks around every corner. Danger that he never knew existed.

Can he keep Mikael safe long enough to figure out exactly what their future holds?

Be the first to review “Heart Sense” Cancel reply