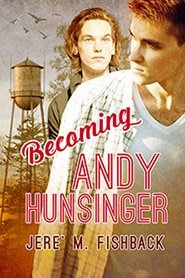 It’s 1976, and Anita Bryant’s homophobic “Save Our Children” crusade rages through Florida. When Andy Hunsinger, a closeted gay college student, joins in a demonstration protesting Bryant’s appearance in Tallahassee, his straight boy image is shattered when he’s “outed” by a TV news reporter. In the months following, Andy discovers just what it means to be openly gay in a society that condemns love between two men. Can Andy’s friendship with Travis, a devout Christian who’s fighting his own sexual urges, develop into something deeper?

Be the first to review “Becoming Andy Hunsinger” Cancel reply