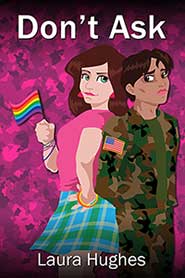 Cat and Mike have been best friends forever, but freshman year of high school finds them growing apart. Cat proudly flies her freak flag; Mike tries to fade into the background. Cat checks out the gay pride group; Mike joins the military club. It’s fall 2010, and Don’t Ask, Don’t Tell is still in effect. Mike likes that — he doesn’t want to ask or tell.

While Mike falls in love with the military club’s values of strength, honor, and courage, Cat falls in love with Calliope, an impossibly sophisticated sophomore girl. Her world is a roller coaster of grand gestures, romantic declarations, and messy, public drama. Mike is quieter with his feelings, but he’s finding it harder and harder to deny them — especially his crush on the guitar-playing new boy. The safety of DADT is beginning to feel more like a burden. Mike believes in courage, but who is the brave one? Can these two best friends, more alike than they know, find their way back together?

Be the first to review “Don’t Ask” Cancel reply