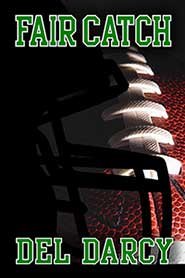 When Blake Thompson meets Alex Ayers, his rival on the football field, the attraction is instant. For one tumultuous high school season, their teams clash as they fall in love.

Playing for the Mustangs, Blake works to carve out a place for himself in the always-frustrating role of backup quarterback. He tries to put out of his mind how unlikely it is that someone like him — a little too short, from a backwater town — could make it in college football.

Alex is now with the rival Patriots, poised to add to his string of records in placekicking. His family has bounced from town to town across the Midwest, spending barely a year in any one place because of his dad’s construction jobs. The college scouts are starting to notice Alex, and a bright future in football beckons.

Blake is able to put aside his feeling that he’s just trailing in Alex’s wake, overshadowed by Alex’s star quality, until Alex gets a scholarship to a prestigious Texas school.

Will jealousy destroy Blake’s regard for his boyfriend? Can Alex learn to settle down and trust someone, despite his vagabond life? If he leaves, what becomes of their love affair?

Be the first to review “Fair Catch” Cancel reply