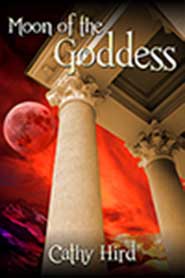 View cart “Tales from Outer Lands” has been added to your cart.

Moon of the Goddess

Thalassai, pampered princess of ancient Tiryns, wakes from a dream and discovers she has been kidnapped. Her fear grows to terror when she realizes her kidnappers intend to use her as a pawn to gain Poseidon’s aid for their valley. The mother goddess, who in the past sustained the valley, calls a bloodred harvest moon into the spring sky. She will challenge Poseidon for the allegiance of her people and assist the princess.

Thalassai’s brother Melanion rides north to rescue her, and finds allies among the servants of the goddess. Slowed by bandits, Melanion is forced to take a tunnel under the mountains even though earthquakes have rendered it hazardous. He skirts the edge of Hades’ kingdom as he races to reach his sister in time. Caught between the mother goddess and the rising power of Olympus, will Thalassai break under the strain or find the strength she needs to stand up to her captors?

Set in the days of Helen of Troy and the great heroes of Greece, this story takes the reader on a fast paced journey across the sun-drenched landscape of Homer and deep into darkness.

Be the first to review “Moon of the Goddess” Cancel reply