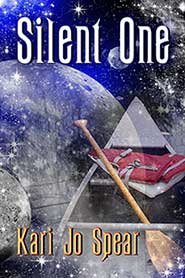 Gareth’s life is violent, frightening, and lonely. Abandoned by his parents and left to a series of harsh foster homes, he becomes as tough as the scar on his cheek. Death and destruction follow him. Sometimes, it actually seems like people are trying to kill him. By the time Gareth is in high school, friends are a luxury he can do without.

But deep inside, Gareth is tender, compassionate, and very gay. The only living soul Gareth lets into his heart is a silent young man who keeps saving his life. Every time Gareth gets a good look at his guardian, the man mysteriously vanishes. Does he even exist? Gareth isn’t sure, until the day at school when his world implodes. Teachers suddenly know way more about him than they should. His secret guardian lies wounded on the darkroom floor. Before Gareth knows it, he and his guardian are on the run. Not only is Gareth more important than he ever dreamed, but the future of an entire planet depends on him. It’s going to take all the courage and love Gareth has to face his destiny.

Be the first to review “Silent One” Cancel reply