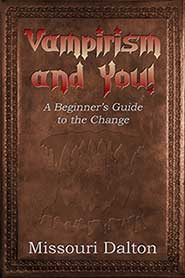 Louis’ whole life was planned right to a bite on the neck at his seventeenth birthday. The British native has a whole lot of changes coming his way. There’s the cravings, the urges, the relocation to rural USA…it’s a lot for a teenager to handle. Throw in the possibility that he might not be as straight as he always thought and it’s a tangled mess as Louis tries to navigate his new life as a vampire.

Things aren’t going to be easy though, and his foster-vampire Duncan is determined to make Louis a fine upstanding example of vampirism—or else. Louis has his handbook though to explain well, some things. But not everything.

When a new vampire shows up in town, Louis thinks he’s finally found someone to confide in, except Eli has his own agenda and Louis is about to find out that being a vampire means more than drinking blood and causing mayhem—there are also dirty politics, dark secrets, and a whole lot of reading assignments.

Be the first to review “Vampirism and You!” Cancel reply