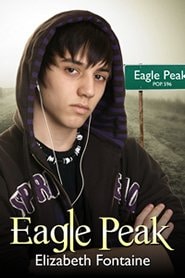 Eagle Peak, population 596, has two bars, five churches, and a vibe (or lack thereof) that couldn’t be more different than Sean’s native Minneapolis. Moving to rural small town Minnesota, Sean must leave his life of acting classes, going to all-ages shows, and hanging out with friends, to enter into a world of pep rallies, pick-up trucks and country pop.

Sean’s inclination for heavy eyeliner, black attire, and surly attitude make him an easy target of suspicion, intrigue, and prejudice in the small town of Eagle Peak. But despite Sean’s growing sense of dread and depression, small town Minnesota also offers a lot of firsts: he becomes the love interest of three classmates of which one is a closeted gay boy afraid of his own sexuality, he is surprised to discover and chant with a Buddhist family in town, and he gets in the middle of an abusive father and his town jock son. Sean’s old life of theater, live music, and diverse friends collides with his new life in Eagle Peak, and Sean is left confused about what he thought he knew about small towns, the world he left behind, and himself.

Be the first to review “Eagle Peak” Cancel reply