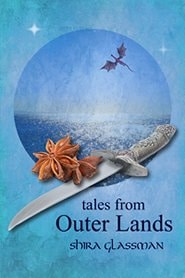 Rivka in Port Saltspray: Trapped in a seedy port town because an innkeeper is holding her shapeshifting dragon-horse hostage until she can pay all the charges he invented, nomadic warrior Rivka finally has a chance at some decent money when a wealthy but weak man hires her to rescue his fiancée. But she has to think on her feet when she learns there may be more at stake.

Aviva and the Aliens: On the night before the royal Passover seder, Aviva has to outsmart the aliens who abducted her to cook for them because they had grown sick of their spaceship’s food replicators. Will she get home before Queen Shulamit wakes up and panics from her absence?

Be the first to review “Tales from Outer Lands” Cancel reply