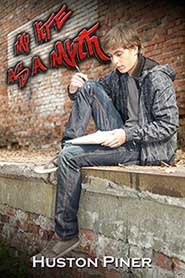 My Life as a Myth

It’s 1969 and high school freshman Nick Horton has got problems; he’s an easy target for bullies, he’s a social outcast who dreams of being popular, and he doesn’t understand why he’s just not attracted to girls. So after a series of misunderstandings label him a troublemaker, he’s delighted when Jesse Gaston and his gang befriend him. But while Nick just wants to explore his growing attraction to Bobby Warren, Jesse’s campaign to give him a new image soon transforms the shy loser into an anti-establishment student hero and before long, Nick discovers that if it wasn’t tough enough just pretending to be straight, now he’s got to act cool too! As Nick strives to understand his emerging romance with Bobby he also finds himself besieged by would-be girlfriends. At the same time, he also has to deal with increasingly dangerous goings-on at school and the Vietnam War’s destructive impact on his family.

Nick’s freshman year is a remarkable journey of ridiculous misadventures, unexpected psychedelic explorations, and tragic turns of fate.  Is a world still reeling from the sexual revolution and the illicit pleasures of marijuana and underage drinking ready to accept two boys in love? Can Nick and Bobby’s relationship survive a world where acid rock rules, status is everything, and being gay is the last taboo? My Life as a Myth is an often humorous but ultimately heartbreaking story of a boy’s struggle with sexual identity and first love in a violent and hostile world.